The ability to lead and manage is sometimes compared to team sports like basketball and football.  Often the abilities of sports captains, players, and teams are exampled as to what makes a great performance.

Yet coaches understand that a team’s performance depends on a range of supporting systems:  A system of playing on the field that optimises players and team capability and opponent weaknesses; a system of selecting, training, and developing players; a system that engages and commits players to do their best, and so on.

While leaders and managers understand their organisations similarly perform, learn, and improve based on underpinning systems, a conscious approach to managing change and achieving high performance through systems – a Systems Thinking (ST) approach - seems less discussed.

A system can be described as having a purpose and made up of various interrelated or interdependent factors, such as activities and interactions.  The arrangement and performance of these system’s factors affect the performance of the overall system, as does its ability to receive and use feedback.

There are three approaches to organisational systems, some you may recognise immediately and others you may not: 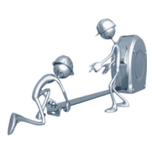 Functional systems have an end-to-be achieved, where the system is designed to achieve that objective.

Functional systems are found everywhere in organisations, and provide the basis for developing standards of repeatable best practice and outcomes.

Sometimes these are built into even bigger systems – frameworks- such as IT Enterprise Architectures involving Portfolio and Project Management (PPM), Information Technical Infrastructure Library (ITIL) and ISO Standards.

Functional systems provide consistency through standards of service delivery, and means of improving that service delivery.  They are rational and events based systems.  These systems are often process level focused though can also include issues at an organisational, role, and employee level.  In any case the cause and effect of a benefit or problem is direct and traceable in a deductive, and linear (or algorithmic) fashion.  For example, Key Performance Areas (KRAs) and Indicators (KPIs) can be linked within management systems across an organisation and used to report on, manage, improve performance, and reward.

Methodologies to improve functional systems include:

Structural systems can be used to plan improvements in decision making within the organisation.  Such systems look beneath and beyond the surface events that, for example, Functional Systems look at.

Such systems use analysis in a way that highlights underlying patterns in relationships.  Structural system relationships show up as “links” and “loops” that, in a “non linear” way, result in predictable cause and effects.

For example, repeating patterns where “quick fixes” continually back fire causing delay and distress, yet remain repeated by management; where the obvious (repeated) “fix” results in subsequent unintended severe consequences due to unforeseen circumstances; where there is entrenched deep conflict between individuals or their issues; where crucial and important advice in decision making is continually left out; and where organisations remain in continual crisis and don’t improve because key elements underpinning and affecting their viability remain overlooked and not understood.

Methodologies to improve management decision making and planning include:

Interpretive Systems model "reality" built from differing views (pluristic perspectives) of the system's stakeholders, as opposed to objective, tangible, and observable characteristics of a system taken from a single view (unitary perspective), such as that of management, as is found in Functional and Structural system approaches.

Interpretive systems can handle complex, or “messy”, problems or situations and look at both human designed systems (such as systems of work) and social systems (such as workplace relationships).

In the process of developing such preferred Interpretive systems, the (subjective) views of the stakeholders and their issues in relationships with others and the “objective” organisational issues (such as problems with work systems) draw in full stakeholder involvement, and develop outcomes that resolve differences affecting performance.

This is an “emergent” process addressing system contradictions and participant expectations.

Methodologies to handle complex or "messy" problems include:

The three Systems Thinking Approaches may also be compared in other ways, refer to Figure 1 below: 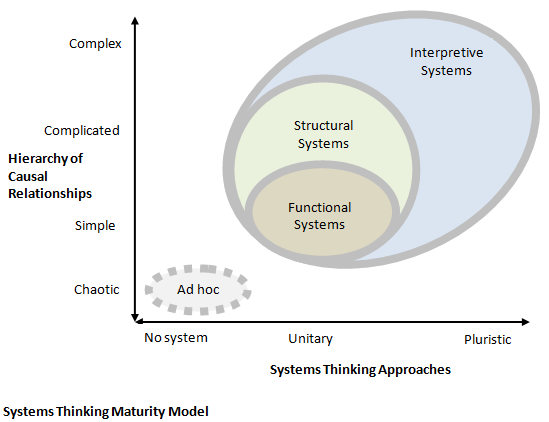 This blog is mainly based on an article by Professor Mike Jackson Fifty years of systems thinking for management found at http://bit.ly/rrLDBp

A more detailed supporting publication by Professor Mike Jackson is Systems Approaches to Management found at http://amzn.to/w5hpez
Posted by David Alman at 1:37 AM 8 comments:

David Alman
Much of my career was in developing and managing Human Resource Functions to proactively support organisations undergoing very high rates of change, though also includes time in line management, and running a quality improvement unit. It became clear to me that ongoing increasing rates of change, levels of uncertainty, and resulting increases in organisational conflict meant new ways of looking at and addressing organisational issues were needed, and so Proventive Solutions was set up to improve methodologies and deliver consultancy services to improve Organisational Health. Qualifications include a Degree in Applied Psychology, post graduate qualifications in the fields of Human Resource Management and Conflict Management, with a broad range of supporting training.